You love making music, but you're not sure if production matters. What kind of an effect does good (or bad) production have on your career?

It takes a lot of effort and money to work with skilled engineers and producers… Deciding whether it’s worth it is ultimately up to you. Your goals as an artist absolutely need to be considered, because what you want from your music directly impacts the product you need to deliver to your fans.

Listen now to learn about the production bell curve and why it’s important for bands seeking mainstream success to invest in proper production for their music! 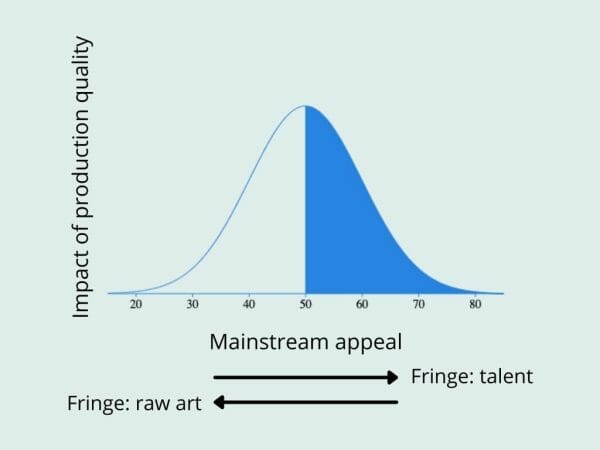 To help keep Bandhive going, we sometimes use affiliate links. This means that if you buy something using one of the links below we may get a small commission. This absolutely does not affect what you pay for any of the linked items – your price will be the same whether you use our links or not. This trickle of income is what helps us keep the free content flowing!

We are a participant in the Amazon Services LLC Associates Program, an affiliate advertising program designed to provide a means for us to earn fees by linking to Amazon.com and affiliated sites.

It is time for another solo episode of the Bandhive podcast. My name is James Cross, and I'm here to talk to you about the production bell curve, I know this doesn't sound exciting, but really it means that if you want to be mainstream production matters.

If you don't care about being mainstream, then production doesn't matter as much, but this doesn't just come down to how mainstream you want to be. It also matters on how mainstream your song is. For example, if you're playing pop punk, even if you don't care about becoming mainstream, if you want just a handful of fans to care about you, You still need to have somewhat good production because you're in a style that relies on good production. By now, as music fans, we've all noticed that the most popular music has extremely polished production. Even if it's lo [00:01:00] fi music, it has lo fi and a nice, warm and comforting.

Unlike many of the home recordings I hear that are lo fi in a harsh, brittle, just bad way. And this is because commercial lo-fi successes have really good production, but it's minimalistic. And that's the difference? Good. Lo-fi is minimalistic, but clean, warm production. Versus bad lo-fi for lack of a better term, which is just lo-fi because the recording isn't good.

There's a key difference there. And for people to enjoy music, it does need to sound appealing. and that's why production is so important for most artists. Now here's where the bell curve comes in. Imagine a bell curve, or if you're on YouTube, check the screen because I'll put up a graph here of what I'm talking about at the peak of the bell curve from about 45 to [00:02:00] 55%, you have the top 10% of artists.

These top 10% represent mainstream music. This doesn't necessarily mean top 40 mainstream, just that they're mainstream in any popular genre, whether it's pop rock, rap or something else that's widely popular. This center range is what probably 90 to 95% of people in the U S listened to. I know in other places like in Germany, underground music is a lot more popular than it is here in the U S in the U S pop is the dominant.

nonetheless, in that center range, whether it's pop or not, it's commercially viable and well produced. So we're talking about like, you know, obviously your Justin Bieber's, but also the used and modern AFI. Well, I shouldn't say modern AFI, I should say like mid era AFI, great production, great talent, and a very popular sound.

Even if they're not necessarily mainstream. but depending on your [00:03:00] style and what you intend to do with your music, maybe you don't need to have that amazing production because on either side of that peak, the bell curve gradually tails on.

Let's say to the left of the bell curve, you have the more simple styles of music like eighties, punk, or solo acoustic acts something with a rather stripped back raw sound. On this end of the spectrum, production can be more laid back and still find an audience because it's about the soul of the music and the fans appreciate raw, real art.

That's really what it comes down to is the fans don't care about production because they just care about whether it's real or not. On the other side, the right you have more technical artists. The production again, doesn't matter as much because the technical skill and ability of the performers matters more than the overall sound.

So we're talking about like your guitar, legends, your Joe Bonamassa is your Steve Vai. [00:04:00] Those kind of guys, they are just so good at their instrument that it doesn't matter if the production is good. Now those two artists, I mentioned have really good production, but I'm saying if that's what you're going for, production, doesn't matter as much, just because of how impressive the sheer talent of the performance is. If you hear an impeccable lead guitar, that's going to outweigh how good the mix is in most cases. so what's my point here. Well, if you want to be famous, You're going to need to pay attention to your production and make sure your production is at least passable to a mainstream audience.

Don't settle for poor production. It is not worth it. You need to make the proper investment. Like I was saying earlier, a pop punk band who prides themselves on being DIY, but has awful mixes. They're not going to go anywhere just because pop punk by definition is a Polish genre.

At least not in the Bandhive world. We mean delegate it yourself because you make the decisions you're in control. You don't have a label or a management company telling you what to do. You and your band mates are in charge, which means you do it yourself by delegating to the right people for the right job.

So as a pop punk band or whatever genre you're in, you can maintain those DIY roots by outsourcing to the right people and [00:06:00] making your project better. You make those choices. That means you're still DIY for an example, even going back to green day's album, ducky the production, it was simple, but it was well executed.

It sounds pleasant and appealing. You can say the same thing for lots of other genres, metal electronic, and of course pop, you can have a simple arrangement in production, but still have it sound amazing because the production is good. Simple and good are not mutually exclusive. That is one of the keys here.

if you want to show off your raw passion for the art you make, that's fine. You can show off your music with a raw DIY production that by mainstream standards, isn't very good.

That's fine. And you will find an audience there, but don't expect to become a mainstream artist with that audience. At the same time. If you are an amazing instrumentalist, you can focus on that and put out music as [00:07:00] an instrumentalist and not have to worry as much about the production, but you're not going to become mainstream because that's not what you're going for.

If that is what you're going for, then you need to worry about your production.

either way, if your production isn't amazing. You're not likely to become the next Justin Bieber or AFI or the used or green day or any band lake that who has had major success mainstream or not in their genre. That's not what your goal is. If your goal is to go out there and do a raw production, that's fine.

Again, like more power to you, but don't expect mainstream success to come from that. it comes down to looking at your goals and realistically saying, what do I want to do with my music? Do I want to be the biggest band in my genre? If so, pay attention to your product. But if you want to focus on the raw art, the raw talent, anything like that, production's not [00:08:00] going to matter as much, like I've said multiple times.

You just need to know and understand if you're focusing on raw talent and art, you're probably not going to become the next big act in your genre.

I know this might sound super discouraging. I don't intend it to be that way. All I'm saying is understand your goals and base what you do on those goals. Let those goals shape your sound. So if you want to go out and be that next big artist in your. Go do that.

You have the power to do that as a DIY artist, delegate it yourself. Find the right producer to work with you and make an amazing album That does it for this episode of the Bandhive podcast. I hope you enjoyed my little uh, my chart here of the Bandhive production bell curve. It's going to be in the show [email protected] slash 1 1 8.

Again, that's bandhive.rocks/118. You can go there to view the chart. It's just a very simple bell [00:09:00] curve, but it really does, in my opinion, illustrate how much production matters for some artists and why it doesn't really matter for other artists.

So go ahead, take a look at that bandhive.rocks/118. And. We'd love to hear your opinions on this. If you go to Bandhive dot Rox slash group or search for a Bandhive on Facebook, you'll find our group. And you can chime in on the discussion for this episode, because I want to see if you agree.

I think this might be a rather polarizing opinion, even though I personally believe it's true. Maybe you feel otherwise, maybe you agree. Yeah. Let us know I've got a fun episode plan for next week, which I'm actually going to be recording in just a few hours or so, because I'm going on vacation.

I'm going to Germany to see some family for like a week and a half. If everything goes well, please COVID, don't ruin this as you have everything else in the past two years. So fingers crossed and I'll be batching out a bunch of content before I go. So I'll be recording again in an hour or two, [00:10:00] but you won't hear that until next week, Tuesday at 6:00 AM. And your favorite podcasting app until then, I hope you have a great week stay safe.

And of course, as always keep rockin'.

Your band = a career

© Bandhive
A division of Don't Overthink This, LLC